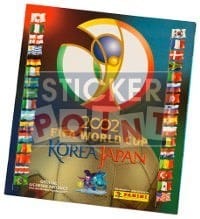 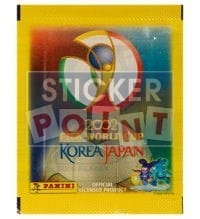 For the 17th football World Cup there are even two premieres. Firstly, this World Cup took place on the Asian Continent for the first time and secondly, it was the first tournament that had two host countries. For the first time two nations shared the Football World Cup; namely Japan and South Corea. These countries are a prime example of football conquering the world. This World Cup triggered a big hype in the land of the rising sun and people were more interested in football than ever. Panini also produced a phenomenal album for this World Cup in 2002 to emphasize the uniqueness of this tournament. In the course of the finals one could experience how people were moving closer and closer together. This was the case, even though a great ocean is separating the two countries. Let yourself be part of this fascination and relive this incredible time.

The cover of the Panini World Cup 2002 album is characterized by the Far East. The lettering "Korea Japan" is accentuated by the colors blue and red. The font highlights the Asian character of the series. The album has 64 pages. Because it was the first time that a World Cup has been held in two countries this Panini World Cup album 2002 contains more stadiums than ever. This World Cup took place in ten different Japanese and south Korean stadiums each. Consequently, the football matches were held in 20 stadiums in total. The map on the back of the Panini album illustrates the dimensions of this tournament: never before there were as many venues which also disposed of the most modern stadiums.

The Panini World Cup 2002 sticker packets are matched to the album. The packet stands out because of its yellow edge. The yellow color of the embossing emphasizes the lettering "Land of the rising sun". This description stands symbolically for Japan and it is supposed to mirror its Asian flair. Panini released 576 different stickers that can be put into the album.

The particularities that exist in this Panini World Cup 2002 series are as unique as the tournament. Never in the history of Panini, there was anything comparable. True football experts and collectors were not only surprised but also amazed. The following specific characteristics have occurred in this series:

Due to the above-mentioned particularities, the Panini World Cup series is rather rare. Besides, it wasn't yet produced in high quantities as it is the case today. Take the unique opportunity to obtain a true rarity. In our online shop, you can still find rare products of the Panini World Cup 2002 Korea Japan. Here you can also find the rare packets from North and South America. Experience the joy and fun of collecting.