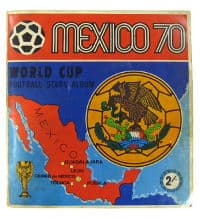 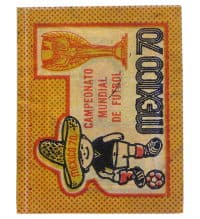 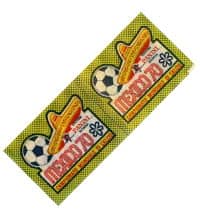 The album Panini Mexico 70 is the first one published, as well as the rarest and most searched one. The collection in total is about 288 cards. These Panini Mexico 70 cards, as they are named among collectors, were not self-adhesive, they had to be fixed by glue.

The collection album is about 16 teams taking part in the world soccer contest. Furthermore there are the usual intros, consisting of rimet cup, FIFA emblem, mexican map, the official mascot Juanito, the world cup poster and the winners of the world cup contests from 1933 to 1966 - all with their badge, team photo and the 3 dominating players.

There are two different kinds of the Panini Mexico 70 album, an Italian and an international one. On the cover of the international one is the map of Mexico and a big round symbol with special Mexico parts. On the Italian one you see the globe, the flag of Mexico and the typical Panini soccer player "Carlo Parola", shooting a ball in the sky, in addition to that the Panini logo. Furthermore on the left you can see a yellow stripe with the cities being host for the contest and the teams taking part.

In the italian album there was an order card and either 4 red blue cards free or a closed bag. The 4 cards had to be cut at broken lines.

All 16 teams, taking part in the contest, are presented on 2 or 3 pages. For every nation there is shown the flag of the country, the badge of the association, a team photo and the players. Furthermore there is printed characteristics, age, actual club and the number of national games of every player.

It is important to mention that the Mexico 70 album was not sold in Germany. Only starting with the contest 1974 it was possible to buy Panini collection cards in Germany. That is why it is not very often to find Panini Mexico 70 cards even nowadays in Germany.

The size of the Panini Mexico 70 cards is larger than the ones of the following series in the next world cups. There are different kinds of backs, which are often decisive for the value of the cards, because some of the backings are more rare than other ones. the following colours of backs are known:

The cards with green-black back were only sold in Italy, whereas the red-blacks were sold in the other countries, where collection was presented (for instance UK). Inside of an italian bag there was always a Bisvalida card.

You could send Bisvalida card back to Panini to get special gifts for nothing or cheaper than buying them in a normal shop. Examples for such gifts are leather football, football shoes and shirts. According to tales from that time you got a football for 150 Bisvalida cards.

In concrete the change ratio was 300 points for a football, but one bisvalida was for 2 points. Due to the fact that the presents were highly attractive, lots of bisvalidas were changed, that is why they are extremely rare today.

The red blue backs were only with the cards inside the italian album. They are extremely rare and nowadays they are hardly available unused, because at that time normally they were cut and glued immediately after purchase.

Among the 288 different cards in total there are about 80 rare ones. They are more seldom than the other 200 not rares and meanwhile it is extremely hard to find them. According to our information the rares are the following ones (in brackets the number inside the album):

One normal rare card (no flag/badge, manifest or intro) has a selling price about GBP 70 - 100. Prices for rare flags/badges/posters/intros in good condition are about GBP 300 - 400. These amounts illustrate why this series is the absolute most expensive for collectors.

Because of the rareness of the panini stickers/cards there is also a market for used cards, which are regarded with collectors, too. These cards are called recuperato or used. Mostly they are taken from used albums in a bad shape and therefore they have traces of glue, paper and other damages on the back. As the front very often is in a good shape, recuperato or used cards can perfectly complete an album.

The price of the bag of the panini mexico 70 collection including 3 cards, 2 green-black and one bisvalida, was 20 lire. On the bag with yellow ground and small black points you can see a football and beside a mexican sombrero.

At the bottom of the sombrero is printed the panini logo and written "CAMPIONATA MONDIALE DI CALCIO". On the back there are three boxes written inside different information in italian language. These information are about the changing of bisvalida cards. There is mentionned that as well collecting points of former series - here you could collect additional so called valida (changed in equal ratio) and pentavalida (counted five times) - are still accepted to be changed in gifts (see above).

In addition there are 3 different international kinds of the panini mexico 70 bag. On one bag you can see a flower instead of the price "L20". On the other one there is a football red white instead of black white and at the bottom of the sombrero there was printed the rimet cup.

The third one is showing the mascot Juanito in the usual kind, standing on a football by his right foot, and furthermore here the rimet cup, too.